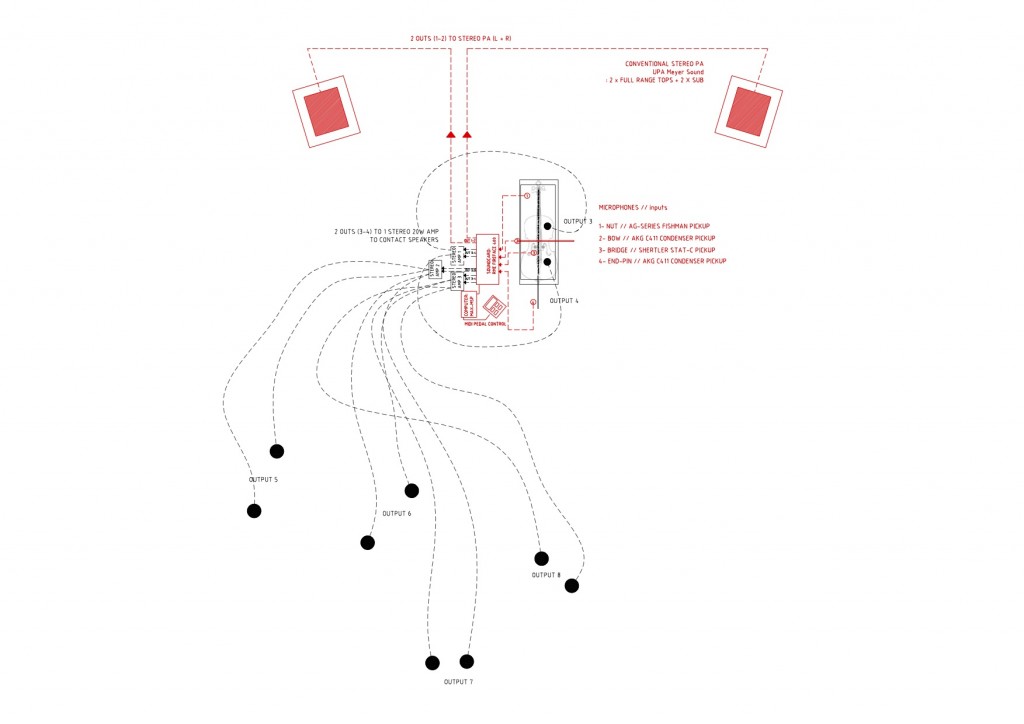 This process had a strong impact on my previous cello playing technics, expanding their impact, while also creating the context for the development of new ones. If the signals from the four microphones, distributed in different points of the cello, are slightly delayed in relation to each other and panned to different positions in the stereo, I can explore the possibility of a perceptual sonic fragmentation of both my gestures and the instrument´s body. This was one of the most important features of the device, as it plays with a very clear idea of gestural and sonic fragmentation. Fragmentation is experienced through a superimposition of the different spectral qualities of amplification of each microphone combined with techniques which enhance the “live” separation of the left and right hand actions on the cello. Usually the actions on the cello have a monophonic result. In this case it could change during the performance to a situation where both hands would be playing with a certain degree of independence with a more prominent sonic detachment. When including the two speakers (stereo) in the background the sonic diffusion is unbalanced in a dramatic way as it introduces a slight temporal and spatial mismatch between the action on the instrument and the sonic outcome.

The following videos are demonstrations of techniques which were developed within the specific use of this fragmentation process. All of them make explicit the relations between the four microphones and the DSP controlled live by the use of the expression pedal. Each demonstration has a general description of the technique and a commentary on the perceived result. The videos should be heard with headphones to make the spatialization clearer.

DEMO 1. Horizontal bowing on open string while changing the mix from a single microphone to four microphones with changes in all the subsequent parameters (delay, panning, compression threshold and reverb decay time). Slight changes with expression pedal imply also changes in pitch because of the ramped delay. Faster and Slower changes have different pitch shifting results.

Note: When bowed, un open string excites both the Bridge and Top Nut microphones with the same intensity. When playing stopped notes with left hand the Bridge microphone is more present. Therefore one can play with this notion exploring the relations between open and stopped strings.

DEMO 2. Playing a with open string plus second string stopped. Full fragmentation to direct sound and back. Changes with expression pedal changing the pitch with different velocities.

DEMO 4. Single stop with vibrato and playing with the clearly heard overtones. The bow changes are much more audible and therefore they are used as expressive sounds. While full length bowing you can hear the overtones produced by the change of the moving node resultant of the contact of the string with the bow. Listen how the overtones produced superimpose to the friction sound of the hair touching the strings surface and the frequency of the string´s fundamental. Different stopped notes and their overtone qualities are exemplified. Vibrato is fundamental to “pull” (excite) the overtone.

DEMO 5. Bowing natural harmonics with Full Explosion parameters. The light and evanescent quality of this technique is here expanded to include the resonance of the top nut (privileging the higher harmonic content of these sounds) plus the sound of the bow hair scrubbing the string.

DEMO 6. Continuous bowing using the bow stick (colegno) in contact with the open strings while exploring the space between the fingerboard and the bridge with a mix of horizontal, vertical and circular movements. Playing the stick and the hair at the same time can expand the texture of the bowing. The two contrary glissandi that we can hear when playing this technique of vertical/circular con legno bowing are now clearer due to the discrete amplification. Left hand mutes, opens or stops the strings. Try different bow pressures to increase or decrease the presence of the bow stick in the overall sound.

DEMO 7. With the previous bow technique (stick bowing an open string) use the left hand to rebound the bow against the string. The right hand keeps the bow slowly moving up and down while the left hand performs a vertical “wave tapping” near the tip of the bow.

DEMO 8. Using the Col legno battuto technique explore different points of contact between the bowstick and the strings in order to increase the variability of sounds that specially the nut, bridge and bow microphones can capture. While playing sounds with clear and short transients the exploded perception of each action is very clear.

DEMO 9. Placing the bow stick on the string and playing with the left hand an open string pizzicato letting the bow rebound on the string. Slow bow movements up and down and changing the pressure to control the rebound can add variability to the produced texture.

DEMO 10. I pressure the bow hair against the string (close to the bridge), keep it in a fixed position and play pizzicato with the left hand releasing the upper portion of the string. If I change the bow stop to different positions, different muted pitches can be heard.

DEMO 11. Just using the left hand tapping the fingerboard in chromatic patterns we can hear very clear the two distinct pitched sounds which are produced by the two lengths of the string to the bridge and to the nut. To mute the portion of string from the stop to the bridge pressure the bow hair against the played string (no movement) between the bridge and the fingerboard: now its the bow microphone that is more active thus changing “explosion” image.

DEMO 12. While performing the previous gesture I include the right hand with a fast pizzicato pattern. The detachment between the two resulting sounds is even bigger thus increasing the detached sonic result of the same gesture.

DEMO 17.Natural harmonics with pizzicato. Hear the natural harmonic content through the bridge and the nut microphones. They have the same fundamental tone but different spectral content. The Endpin microphone captures mainly the percussive action on the string.

DEMO 19. Laying the bow stick in a string between the bridge and fingerboard and tapping with the left hand the string against the fingerboard. Control the rebound rattle of the bow by applying different pressures and changing the point of contact. Vertical bow movements imply change in pitch.

DEMO 20. Holding the bow vertically and placing the screw between two strings. Hammering the strings continuously with the frog by bouncing it from side to side hitting alternately the two strings. The left hand can mute or open the strings which are being hit. When this action is performed very near the bridge the sound of the screw scratching the bridge is also overlaid.

DEMO 21. Following the previous position of the bow I use the left hand to pull the open string and rebound the screw against different points of the string between the bridge and the fingerboard.

DEMO 22. Placing the bow hair on the strings and using the left hand to mute or open the four strings while applying a strong vertical pressure with the bow on the strings. The bow should not move neither horizontal or vertically but in a rotating motion around the point of contact. Changing the different contact points (between bridge and fingerboard) introduces a change in the noise pitch. Bow velocity can change and slow transversal bowing can be applied in articulation with this particular technique.

DEMO 23. Place the bow parallel to the strings on top of the body, between the f-hole and tailpiece. Apply a strong, but varying, vertical pressure smashing the hair against the body´s surface and slightly rotating the bow around a center pressure zone. Use the pedal to change from direct sound to full explosion. (maybe this could be said in the beginning)??

DEMO 24. Muting the strings with the left hand and using the bow between the bridge and the fingerboard with a soft pressure with up and down movements. After changing the contact of the bow to the edge of the C-Bout I explore the different resonances along this corner applying variations in pressure. Return to the strings below the bridge and exploring the noise produced by an intense pressure of the bow.

DEMO 25. Exploring the contact between the bow and the zone around the fine tuners (tailpiece and strings) apply variations in pressure.

DEMO 26. Bowing up and down the endpin with light pressure while exploring long and continuous bowing using the bow stick or bow hair. Using different bow pressure, velocity and contact points on the pin will affect the overall resonance of the instrument adding changes in the noise pitch sensation.

DEMO 27. The endpin is off the cello strap and in contact with the floor. Dragging the cello on the floor with the endpin will function as a “turntable needle”. Extend this action to the bow and combine them.

DEMO 28. Place the cello in an horizontal position over the lap. A new approach to the body is possible as a differentiated access to the body of the instrument is now possible. The lap position provides a freer vibration of the instrument´s body and lower resonances can be heard. Bow the tip of the pin exploring different pressures. Increase in pressure in this point provides the exploration of low muted sounds. Bow the entire length of the endpin exploring different pressures and contact points for sound variations. Bow the tailpiece loop for high pitched sounds. Use the left hand tapping in the fingerboard for a combination of techniques.

The previously described techniques are a central part of the “exploded cello” vocabulary and they were used in multiple improvisations (live and studio) along the research period. The following audio files include a selection of studio recordings where these fragmentation techniques are used in the context of short improvisations (i.e. studies) thus showing further vocabulary explorations around their specificities and articulations. After that I also include recordings of improvisations articulating these techniques with the direct feedback technique.

– Studies for the exploded cello II