Invitation by Susana Pomba for a one night intervention in a program series called OLD SCHOOL.
This performance/concert took place in an abandoned building previously functioning as an elementary school. This was the first time the building would be open to the public since then.

The building plan was constituted by several rooms, where one could still find scattered leftovers from this old occupation: tables, chairs, drawings, bottles and other objects immersed in dust. One of the rooms had the suitable dimensions, localization within the plan and acoustic properties for a performative action where the audience could rest and concentrate on the solo concert and video projection. Placed on the first floor, this room had large windows facing the street and several doors connecting to other areas of this plan/apartment.

Audience was invited for a 30min musical performance side by side with a live 4x3m video projection of a 6 camera CCTV system, placing themselves freely in space. When entering the darkened space you would find on your left a video projection sided by the cello and the amplification gear (mixer, cables and loop sampler). On the ground you could trace a maze of cables that would go under the doors to adjacent rooms.

My approach thus consisted on creating an event that would articulate three different regions of that site: the situation of the live event (performer + audience), the non visible spaces of the building and the outside soundscape. The musical performance should have this structure of the acoustic horizon into consideration. 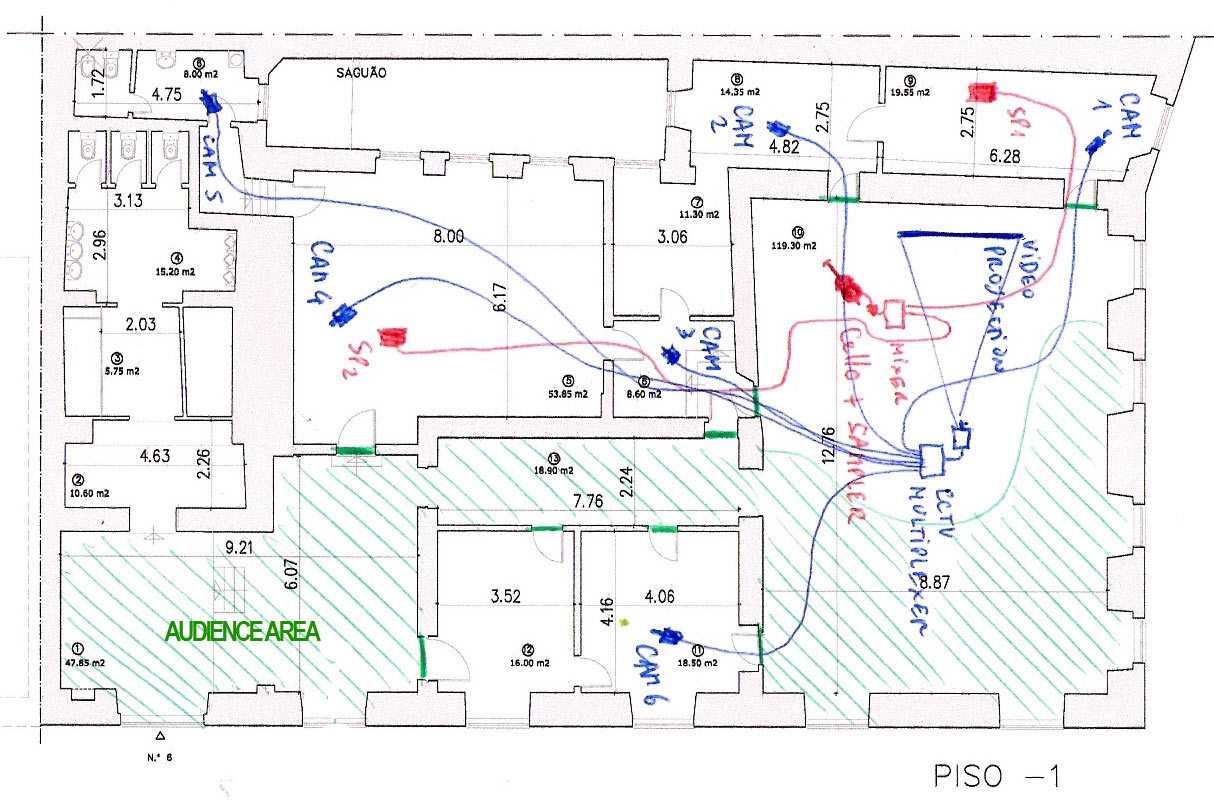 The video would show 6-fixed camera plan compositions as “nature morts” only inhabited by sudden changes in light. During the all 30 min there would only appear in one of the plans a male figure standing in the shadow. Each plan appears on screen between 6 em 14 seconds. The sequence and duration of the plans repeats itself after 16 plans.

The 6 cameras were scattered through the apartment, fixed and framing it in detail. The 6 video sources where feeding a live video loop (3 min) that would change image every 6 to 16 seconds.

part 1. Audience goes into the room. The live video loop projection is on. Lights are out.

part 2: the concert starts. Activate sonically the space: transient noises and very short tone oriented phrases (no tonality definition) “seen” as musical fragments. Intermittencies. Long “performance silences”, helping the audience be aware and construct their acoustic horizon with inside and outside noises.

part 3: gradually the “musical silence” is occupied by a tonal drone slowly constructed during the performance using the loop sampler. The outcome of this looped signal is played on a set of speakers placed inside the adjacent rooms where the CCTV cameras are placed. The result of this drone is therefore present as the soundscape from the adjacent rooms.

part 4: The musical performance finishes with the acoustic sound of the cello slowly vanishing onto the drone chord being looped in the adjacent rooms. The live video loop will continue, lights will not turn up and the audience might move freely in space with the possibility of visiting the adjacent rooms.