For the 150th anniversary of Erik Satie, Teatro Maria Matos invited Joana Gama (a classical pianist performing extensively works by Satie, Cage and Feldman) to gather a group in order to create an original performance based on the works by the French composer. The trio included herself on Piano, Luis Fernandes on electronics and myself on the cello and electronics. My invitation was also extended to designing the scenography for the concert.

In this context I approached the work of Satie looking at his outcomes in multiple formats. Satie left us not only written music but also drawings, writings and an emblematic participation in movies and theatre, dance, opera. Therefore, with the valuable help of Joana Gama, I collected and chose fragments from all this universe and created the scenography and co-authored the music composition for a 45` stage performance based on what I identified as the “ruins of Satie”. 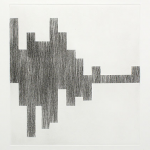 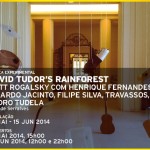 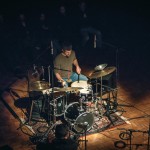 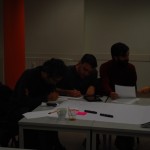 This was a piece for a theatre Stage (the commission came from Teatro Maria Matos in Lisbon). Although the four theaters that co-produced the work have different architecture layouts the scenographic devices were designed for a frontal stage like situation.
It included a vertical surface for video projection, another projection just for text and the set of 10 cymbals.
Sketch for the stage plot and scenography
Photos from the show at Teatro Maria Matos_Lisboa 2016

The video….
The text….
The set of cymbals…These where primarily connected to the cello but could also be used as resonators for the electronic and piano sounds.

The cello therefore “sonically and symbolically occupied” the famous Picabia´s scenography for the Ballett Relâche with music by Erik Satie. This scenography was composed of a vertical curtain composed of 370 projectors each one supported by a metal reflector. It is said that “in the beginning of the second act the audience would almost blind” (ref. “Um teatro sem teatro”_pg 89_MACBA 2007).
In this case

As with the scenography ….final musical composition for the stage performance was based on improvisation sessions where each of us would include fragments from a pre-selected group of Saties works: Idylle, Ogives, Valses, Vexations, Harmonies and Panthée (view CD). This constituted the musical context around which the improvisations developed. In my case this material was included in my own vocabulary as a specificity of this “place”, along with the particularities of the Medusa system and the pre-existing sonic material.

The Medusa system was a central part of this project in the sense that it established a strong relation between the music and the scenography, extending in the context of this research the specific relation between the cello and specific (spatial and symbolic) contexts. In this case the sculptural revisitation of a paradigmatic scenography by Francis Picabia for the ballet Rêlache (with music by Erik Staie) was a central object on stage both visually and aurally. A group of 10 different cymbals (rides) were used as resonators for the sound of the cello and electronics, and also as a percussion set played with a pair of lapel microphones and a drum stick.

One relevant idea was that all these scenographic elements besides their dramaturgic function (in the way they helped define the development of the music and how they structured the space of the stage) had a “ghostly” presence. Every appropriation of Satie´s work would be done using only fragments, as if we where in the presence of a ruins (describe better??) Therefore, and specifically addressing the set of cymbals, these where central to introduce a specific “colour” to the cello.

Besides the presence of this setup in the HARMONIES project I recorded a solo ??? where this setup is used within the specificity of this research, and where the notions here laid down are clearly expressed in the improvisations. The following diagrams and photographs document the overall setup of the HARMONIES project and the articulation between the electronic interface and the hardware setup (cymbals).

The cymbals have very complex resonant modes and using this characteristic to “filter” the cello´s timbre was the objective of this “fourth instrument”. The whole setup included ten different 20´ raides. Each cymbal was prepared with a transducer and attached to a metal structure. All the cymbals had the same input signal but since their differences made them resonate in different ways depending on the sound played on the cello. The amplification system included a frontal stereo PA plus 4 surround speakers, around the audience. Each cymbal was also reamplified to a surround PA setup.

Setup for the solo derivation from HARMONIES project and the max-map patch layout. This setup was used on the solo recordings.

1 – the expression pedal fluctuates between the exploded cello (describe?) and the full resonance of the cymbals. In the latter case the sound signal is rooted solely from the bridge pickup which is processed with a Reverb and a Pitch Shifter before its diffusion through the cymbal´s transducers. Other DSP is possible using the granulation or the frieze patch.

2 – The cymbals setup, once activated by the granulation of the live recorded fragments or the pulsing clicks/beats, is played with a soft drum stick and a pair of lapel wireless microphones.
describe the use of the stereo microphones for amplifying different resonant modes of the cymbals.
The small microphones are attached to my left hand fingers and are used to close mic specific resonant areas of the vibrant cymbals. Each of them is hard panned left and right, and therefore their manipulation has a strong effect on the spatialization of my gestures.

ACTIVATION
This Medusa setup was created for this specific context but was also activated in performances prior to the premiére of the Harmonies project. Due to the expressive qualities of the setup and the necessity to test it live, it was used, in a simplified way, in a group of solo concerts. In each of this concerts the setup included only two cymbals.

In the context of the HARMONIES project the cymbals setup was used in the second half of the performance: